Hugh Hefner, Emperor of Playboys everywhere, popped the question this Christmas to his new bunny Crystal Harris. Hugh is 84 years old and Crystal is 24. It's easy to see what Hugh sees in Crystal but I wonder what it is that she sees in her older viagra-fuelled multi-millionnaire lover? "When I gave Crystal the ring, she burst into tears," says Hugh, "This is the happiest Christmas weekend in memory." 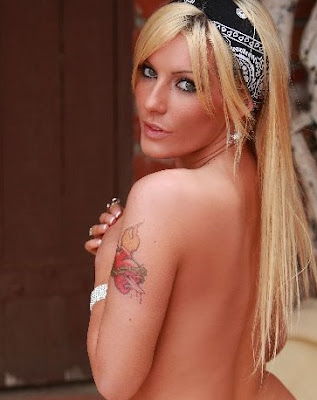 Hugh has been married twice before. Firstly, to Mildred Williams, from 1949-59, who helped him to set up Playboy magazine and launch him on the road to success. Then he flew solo for thirty years, being a bit of a playboy, and admitting to...ummm...being friendly with on average eleven of his twelve playmates every year - just remember that when you check out those old Playboy calendars. Hugh once famously fought a long and bitter court case with the US authorities over some photos of Jayne Mansfield he'd published. The government claimed they were obscene. The case ended in a draw.

In 1989, probably feeling exhausted, he married Kimberley Conrad. They separated about ten years later but didn't divorce until earlier this year. Last year, he was dating Barbie twins Kristina and Karissa Shannon, but probably found that a bit confusing, so this year he settled on Crystal

Kristina and Karissa - or is it Karissa and Kristina?

Re: Playboy Hugh Pops the Question

I swear this guy is a real life Montgomerey Burns, he's just a bit too creepy for my liking!