Growing up in overcrowded and polluted Orange County was no Beach Boys paradise for Damian Fulton. His only escape was to jump onto his Schwimm Stingray at the weekends and escape to the surf. The need to escape from his urban surf upbringing, he reflects in his paintings: 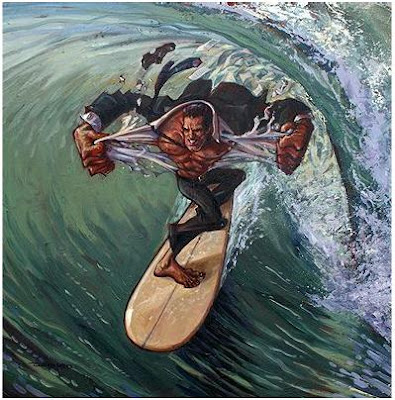 "As a kid growing up in suburbs of Orange County, my image of surfing consisted of the Beach Boys and their 'fun fun fun' message," he says, "But when I was old enough to ride my bike to the beach, I experienced something different to this. At Huntington Beach, no one was chilling in a hammock and playing the ukulele. Instead, I rode my bike in between motorcycle gangs, hippies and drug dealers. I didn't grow up on a tropical island but in the midst of a big city."

For fifteen years, he survived by producing regular comic strip art - the Shred Brothers and Riptide Rick - for BMX magazine amongst others before fame finally gave him some stability - but the paranoia of living in a flawed paradise still haunts him:

Nevertheless, for Damian, the surf represents an escape that cannot be bettered elsewhere. Despite the cracking economy, the cloned retail outlets and the misery of over-consumerism, when you're going for the surf, nothing else matters:

Very cool. Ive seen his art before, that story really explains the images he creates 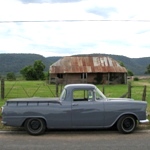 wasn't he featured in car culture deluxe sometime, i have the feature somewhere.