Liz Cohen, who has pretty good bodywork herself and loves to tinker under a bonnet, has developed an adjustable car based on an old East German Trabant.

Liz and her new ride

Currently on exhibition at the Salon 94 gallery in New York, by throwing switches on the dashboard, it's possible to automatically extend the length of car to provide a flatbed for carrying materials / bicycles etc. Another switch will raise the suspension on the back wheels and a third switch ejects the passenger seat (no, I made that last one up)

The amazing Liz built the car herself, having bought it on a trip to Berlin in 2002. It only has a two-cylinder engine so it's a little underpowered, but this is art after all.

Here's Liz after having just bought the Trabant, outside the original factory which once produced 30,000 phut-phuts a year:

and here she is with the finished product - including the base part-extended: 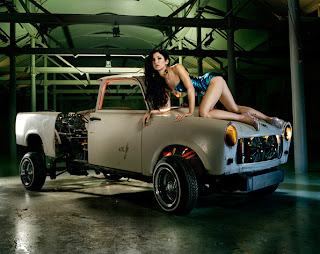