best show ever factss from the shows hair stylist

best show ever factss from the shows hair stylist


Mad Men-inspired 'dos reigned the catwalk this year, from Jackie flips to mini-beehives. Gloria Ponce, the set's hairstylist, sat down with AMCtv.com to discuss the confection-like curls and coifs that have viewers at home whispering, "How did they get their hair to do that?"

Q: Two of the final episodes of Season 2 were set in California. Did the location change necessitate different styles?

A: My research showed that California women looked very different from women in New York. New York styles were bigger and more stylized. LA was softer and just a little behind the times, more towards the late '50s. They all had the same hairstyles -- the flips, the pageboys, the French twists and beautiful chignons. The men weren't so coiffed, and they'd stopped using all that slick gel. They were shaggier, longer, less side-parts. And Palms Springs was more European-influenced. The women were very high society, jet set people. The women had more elaborate chignons and French twists than New York women.

Q: How much did a person's rank affect his or her hairstyle?

A: A lot, actually. Some of the secretaries are more simple, like the secretary that Don fired. She came from the telephone pool, and didn't know how to cover for Don because she was so naive. We made her hair a little dated, simple, and conservative. Contrast her with beautiful, bombshell Christina [Hendricks], with her beautiful red hair and those very stylish curls. You can also look at the divorcee down Betty's street -- her hair is in a ponytail, because she's a mother who works. She doesn't have time to perfect January Jones' coiffure.

Q: A lot of us girls would love to roll out of bed looking like Joan, but it seems like her hair would take hours to perfect.

A: Not really! Get yourself a set of hot rollers and roll up your entire head. Keep them on for 25 minutes, take them out, put your hair up in a ponytail and pin the curls to your scalp. It wouldn't be exactly like Joan's, but it would give you a beautiful flavor of her style.

Q: Is Joan a natural redhead?

Q: Was it common for women to wear wigs?

A: All the time! That was definitely part of Midge's character: She was an artist who explored different types of wigs to make it interesting for Don while they had an affair. Women also used falls, which was false hair attached to a comb that women inserted on their crown of their heads, which is what gave them that characteristic 60's bump behind their headbands. You never saw the comb -- that was a big no-no - -but they were very common.

A: The women would go to the salon once a week, and then they would maintain their hair for six days without shampooing once. At night, they would stuff their hair with toilet paper and little perm papers, and pin their bangs with little clippies so they wouldn't mess up their styles while they slept. If women couldn't afford to go to the salon, they'd put their hair up in pin curls, wrap their heads with a scarf, put on big sunglasses, and run errands until their hair had set.
Q: What's the one hair product you can't live without on set?

A: For women, hairspray. I use two different kinds. With men, I use gel and strong hairspray. Back in those days, men were constantly combing back their hair to keep it looking slick and put-together.

A: Betty has transitioned from the tightly curled 1950s hairstyle to a little more updated hair this season. We put her in headbands and chignons recently, and her hair is a bit bigger and more stylized because she's really coming out in 1962.

Q: Are you excited for mid-60s beehives?

Q: How much did a person's rank affect his or her hairstyle?
_________________
Kat Creasey- Makeup Artist & Jewellery Designer
My Little Rockabilly- Australian Pin Up Accesories
1966 XP Ford Fairmont Sedan

i really wanna see this show, is it out on dvd yet?

it's so weird how back then there was so much focus on hair. assuming because they couldnt afford fancy clothes during the war etc. 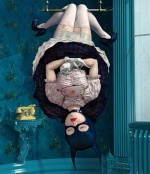 There wasn't a hair out of alignment back then
it is on dvd, but from the states
you can watch all the episodes on the website just google 'mad men'
_________________
Kat Creasey- Makeup Artist & Jewellery Designer
My Little Rockabilly- Australian Pin Up Accesories
1966 XP Ford Fairmont Sedan