Polka dots must be a girl's best friend - because the truth is, they make every girl, no matter the size or shape, look great: 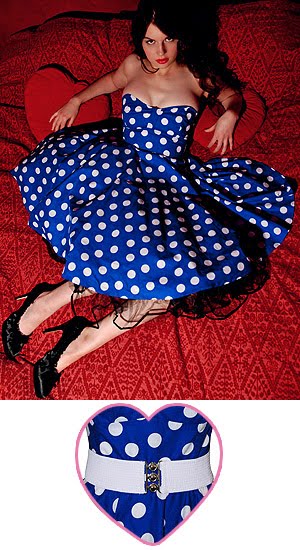 The name originated in the 1870s. The rockabilly music of the time - an upbeat swinging waltz based on German volkslieder - was called the polka. It's huge popularity led to manufacturers cashing in on the name - and so the dotted accessories, handkerchiefs, fringing etc, that were becoming fashionable amongst young girls at the time, also became known as polka fashion.

Polka dots are very flexible and can be used to augment almost any outfit. The Pipettes created a minor fashion trend in the mid-noughties in the UK wearing eye-catching polka-dot outfits on stage and the designer Carolina Herrera has a soft spot for them, often including them in her haute couture designs.


The amazing Pipettes - the blonde one's mine.....

The grand-daddy of the polka dot movement, however, was Brian Hyland, with his two-minute proto-surf epic from 1960 - Itsy Bitsy Teeny Weeny Yellow Polka Dot Bikini - probably the world's greatest ever song title.