Get it Cut! The Sterling Hairdressing Parlour - Sydney

Get it Cut! The Sterling Hairdressing Parlour - Sydney

Retro glamour is what drives Tony Vacher’s customers to his Surry Hills hairdresser and traditional barber shop - increasingly prompted by shows such as Mad Men.

“I trained in the 1980s when this look had a second revival and, ever since then, both hair and fashion has been very loose and unstructured and a bit scruffy,” Tony says. He sees hope, however, in the third rockabilly wave of the current decade. “I just think people want to look smarter again - they’re into dressing up.”

Sterling Hairdressing Parlour and Barber Shop caters for both those who are rockabilly purists and those who simply want to sample the look for a paticular weekend or party. The shop has three sections - a 1940s dispensary and shop front, a mid-1950s girls’ salon and a traditional, 1930s-style barber, offering a cool shave. 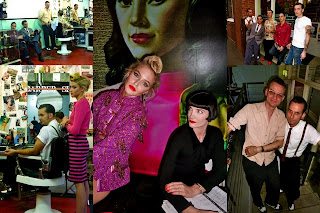 Originally from the UK, Tony is now committed to building his career in Surry Hills. “I want to be as close to here as possible,’’ he says, “It’s just the perfect spot for me, it’s kind of chilled out, a bit artsy.”